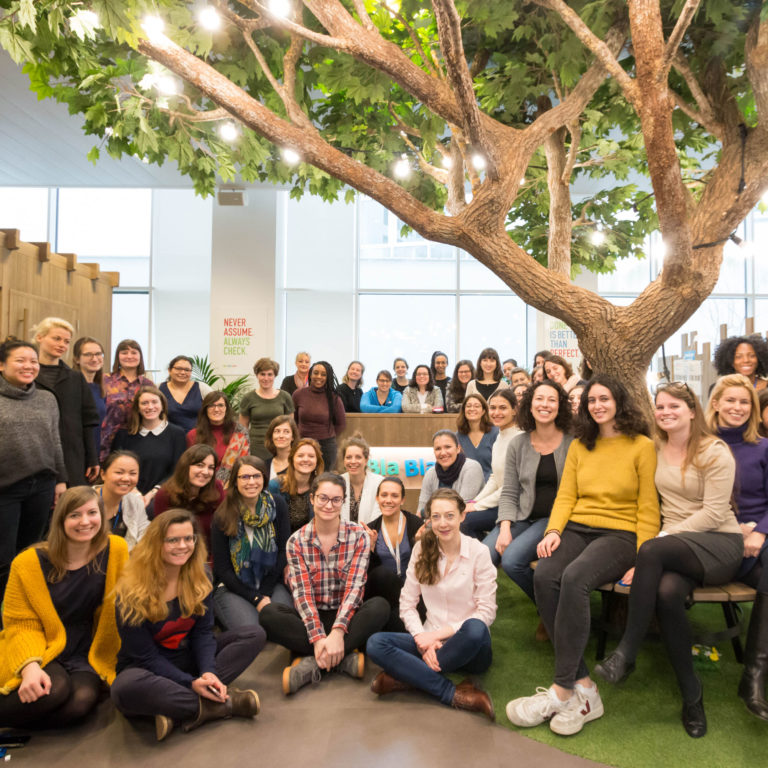 In honor of International Women’s Day on March 8, let’s meet some of the amazing women at BlaBlaCar.

As today, March 8, marks International Women’s Day, we wanted to acknowledge the women who make up nearly half of our team at BlaBlaCar.

The tech startup world has been predominantly men over the years, but there is a growing number of women who are bucking the trend. At BlaBlaCar, we are more than happy to be included in this movement. Today, 46 percent of our team are women.

Since the early 1900s, people have been celebrating the wonderful achievements of women around the world. This year marks the 106th annual celebration after being formally recognised as International Women’s Day in 1911.

In honor of today, we are highlighting a few extraordinary women on the BlaBlaCar team. With this year’s Women’s Day theme being #BeBoldForChange, we reached out to VP of Product Programs Cyrielle Callot, Engineering Manager Fanny Gaborit and Head of Brand and Design Monika Holod to hear how being bold has helped them accomplish their goals:

VP of Product Program Cyrielle Callot oversees the product, tech and data efforts to meet the company’s business objectives and sits on BlaBlaCar’s Executive Committee. After joining in 2012, Cyrielle worked tirelessly to expand the platform from her native France to 22 countries, landing her a spot on Forbes’ “30 under 30” list.

But how did Cyrielle get to where she is today?

“When I joined BlaBlaCar, I was mostly focused on creating an impact, learning new things and working with amazing people on a product that I loved,” she says. “ And this still holds! That’s what’s been driving me for the past five years, and it’s how I grew into my various roles.”

As a vice president and a sole woman on our seven-member executive committee, Cyrielle has learned that the key to creating a successful company is cultivating a diverse mix of culture, expertise and gender. She cites Lorrie Norrington, former eBay president, as one of her influences.

“I had a chance to chat with Lorrie once and was very impressed by how smart, driven yet extremely humble and low-key she was,” Cyrielle recalls. “That’s the type of balance I aspire to as a leader.”

“On a more personal level,” she adds, “My mother has been a true inspiration. She’s extremely dynamic and empathetic, which is why she is doing so well in her profession as a head nurse.”

Cyrielle also has one simple advice for women: “Don’t focus on being a woman as a key differentiator — just go and do the stuff you love.”

While women comprise half of the global population, this percentage isn’t reflected in the tech industry. Engineering Manager Fanny Gaborit, who leads our tribe of engineers to build the product across all platforms, has seen firsthand the ratio imbalance, beginning in engineering school.

“I’m not sure why this has been the case, but I imagine education and culture play important roles,” Fanny says. “My mother is a doctor and my father is an engineer, so this path was one I naturally considered. And I’m happy to have done so.”

A world traveller, Fanny spent two years in Bangkok for her master’s in computer science. Her academic research and NGO missions took her to Burma and the Philippines. After returning to Paris, Fanny signed up as a BlaBlaCar member in 2009 to see her family across the country. Eventually, Fanny joined the BlaBlaCar team in 2015.

“When I was looking to start the next chapter of my life, travel was a theme that resonated with me and something I wanted to continue working on,” Fanny explains. “So BlaBlaCar was a great mix of a tech challenge and a thematic fit.”

Fanny also seeks adventure in her hobbies and passion.

“I love mountain climbing, which is also a bit of a man’s world,” she says. “Some of the women who have inspired me most were among the first mountain climbers.”

For Fanny, both of these realms can be equally successful for men and women.

“There are no differences in competencies between a man and a woman in the tech industry,” she says. “This is an industry in the making, in constant evolution, in which anyone creative can make a difference if they wish to. The only obstacles are the ones we create for ourselves.”

Head of Brand and Design Monika Holod manages a well-balanced team of men and women. She oversees 12 designers and video producers, who create content for BlaBlaCar on a daily basis, and leads our marketing strategy.

“You have to have passion to do this. You need to be obsessed,” Monika says. “We can collect all the analysis, data, numbers in the world — but what it comes down to is: Are we inspiring people?”

Before Monika settled for a career in the branding world, she had different ideas of what path her life could take. She considered studying math or architecture — even sailing as her parents are both sailors. Eventually, Monika settled on a combination of fine arts and economics for her studies.

“I knew early on that I wanted to work in branding because I had a strong interest in analytics and a passion for the arts,” she explains. “Branding was the world that connected them both.”

Monika got her start as a graphic designer and art director at advertising agencies. With more experience under her belt, she pursued her goal of being a marketing manager before ending up at BlaBlaCar, where all of her interests overlap.

Monika says her “just do it” attitude comes from her mother, who set an example by pursuing her sailing dreams in Poland during the 1980s. Society at the time wasn’t exactly favorable to girls seeking to join the maritime academy.

“There were only two spots per year for girls, but my mom wasn’t intimidated by those odds,” Monika recalls. “She passed all her exams, nabbed the coveted spot, and then met my father along the way.”

What message did Monika take away from her mother’s story?
“If it’s your passion, just do it.”

Diversity in the workplace

We’re proud to count such passionate women in our team. As BlaBlaCar continues to grow, we’re committed to making improvements on gender equality and diversity. We not only want to give a shout-out to the women on our team who make BlaBlaCar fun and serious, but also to the millions of women who are a part of our community.

Thanks for sharing your journey, ladies!

Find out more about